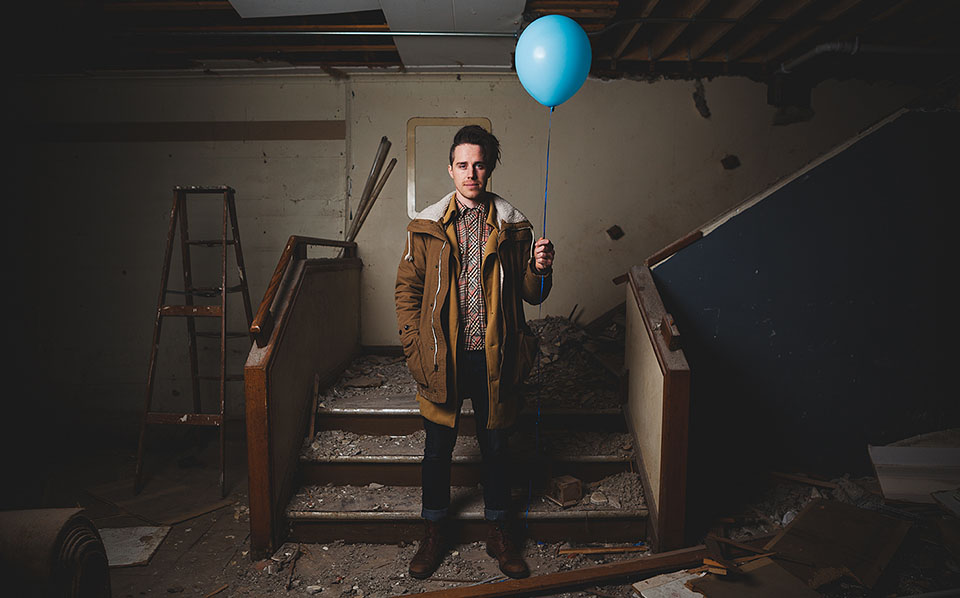 What should listeners know about American Opera — up until this point?

American Opera started off as a failsafe of sorts. I felt my previous band of 8 years was reaching its end and I was nowhere near ready to stop playing music so I started writing songs on the side. So it was a failsafe in case my band fell apart and a coping mechanism for when that inevitably happened.

I tried to pick up where we left off. Touring in the same van down the same roads to the same venues but this time I was by myself, and it was awful. It was depressing. I went from traveling the country with my best friends to traveling the country by myself. I went from having 24 hours of fun per day to 30 minutes of fun per day. Spending weeks at a time on the road by yourself starts to mess with you after awhile. But those 30 minutes on stage were worth all of the loneliness, self doubt, and self hate. Those 30 minutes make it worth it.

Since that rocky start, I fell in love with touring again. I’ve self-released 3 hand-made EPs and Antique Records recently released it all together as a collection. I’ve performed over 300 shows spanning the US and Canada, supported The Avett Brothers, Josh Ritter, Cursive, and more. I’ve played SXSW, Common Ground Music Fest, Bled Fest, and the Vans Warped Tour in 2012, 2013, and 2015.

Tell me about the title of the record.

I moved to New York City 4 years ago and it basically chewed me up, spit me out, and then stomped on me a couple times for good measure. I was sitting at a bar talking with another artist about the music business. We were talking about grinding it out on the road and why we chase a dream that is so hard to catch. I remember saying “This business is small victories in a sea of misery” and to me that is true. The long days spent away from your loved ones, the weeks, the months, the years, the financial instability, the crippling self doubt, the never ending road of try, fail, try, fail, try again, fail again. All of that is miserable. But there are moments, and I think this is true in life as well, that make every little piece of the puzzle worth it. Tiny little glimmers of hope that keep egging me on. Keep pushing. Keep going. I recognized a theme in my songs where I would be telling a story and that story wouldn’t end until there was a glimmer of hope. People have told me that my songs bum them out but in a good way. I think I know what they mean. I write when I’m sad, but the song isn’t ready until there’s a reason to go on. There needs to be a little happy with your sad. The small victories motivate me to go on.

Were there central themes or ideas you are exploring on the record lyrically or musically?

The idea behind Small Victories is that the world is going to grow fists and start swinging at you, but you need to find reasons to get back up. Lyrically there are common threads in the songs that explore heartbreak, hope, loss, religion, mental health, and more. Some of the songs are about failure. I lovingly refer to these songs as “pep talks to myself.” Maybe if I sing them over and over again, something will change. Like lying to yourself over and over again until that you start to believe it.

I try to include signs of hope in each song that are kind of pushing me forward. They’re holding me up. If they aren’t there, I fall apart. If I have to lie to myself to keep going, then so be it. I need to keep going. But there are a couple of songs on the album that were nearly impossible to find the silver lining in. The song “Michael” is a tribute to my cousin who was murdered. The case remains unsolved. Another song is about losing one of my close friends to suicide. Those two songs were hard to write. It’s hard to see the silver lining in those realities. It’s hard to lie to myself and say that everything is going to be alright.

Musically I wanted to honor the ups and downs that the lyrics represent. I wanted to take big celebratory parts with horns and all the bells and whistles that would make you think you’re at a parade and plop that right next to a sobering nightmare scenario where you’re having a conversation with the devil. I wanted to take beautiful strings and quietly picked guitars and place them next to full fledged rock songs. I wanted to show the ups and the downs, the good and the evil, the wins and the losses. There are sections of the album that feature a horn section, parts that feature a string quartet, there are quiet pretty parts and loud rocking parts. There’s even an a cappella performance.

What were you hoping to accomplish sonically with the record?

Tell us about the production process -- who produced, engineered, mixed, mastered?

I hate recording. It’s so stressful and so final. I prefer live shows. So generally I’m reluctant to record because I don’t want to cringe at a vocal take years down the line. But I was excited for this experience. I was moving to Atlanta to track the record. I was doing this all by myself. I wrote every single part. I played 95% of the instruments on the album. I was spending too much money to be at a big fancy studio but it was all going to be worth it. I was so excited. This was going to be me. All in all, the recording process sucked.

I produced the album myself. Matt Goldman engineered most of it. Mark Michalik mixed it. It is currently in the mastering phase. It was a tough process. I had demoed the songs in New York after writing the album in Michigan, Chicago, and New York. I flew to Atlanta, GA to begin tracking the album and the airline lost my guitar. As an independent musician, losing that was the first of a series of blows in the recording process. I had to fight with them all month long and they only paid for a partial replacement of the guitar after I released a love song to them and their service that went semi-viral thanks to being picked up by Huffington Post and other major media outlets. The whole ordeal led to me missing my flight home and cost me a lot of money that I didn’t have. That and some other factors that I probably shouldn’t discuss led to a crappy recording experience. I flew home to NY and finished tracking the album at a different studio, then flew to Chicago to mix the album with my friend Mark Michalik.

I played the majority of the instruments on the album. I tracked vocals, guitars, bass, drums, keys, melodica, bells, etc. I hired some outside help for horns, strings, female vocals, and some more drums.

I was emotionally drained after recording. My pride and confidence were shot. I remember crying the entire plane ride home. At the same time, I felt very proud. I love the songs and I love how they turned out. I remember feeling relief. And this is a weird thought, but I remember thinking “I can die now if I’m supposed to.” I don’t want to die and I really didn’t want to die during the recording process. That’s weird but that’s what I was thinking.

Even though the production process wasn’t what I hoped it would be, I am very pleased with the results. I’m really proud of it. I’m extremely excited to share the album. I think it’s an accurate portrayal of the years I spent writing and recording the album. I think it shows the ups and downs of a guy who’s kind of going off the deep end.

How did the process of recording this album differed from previous projects?

It was my first time being in a big studio and it was my first time paying that much money for recording. Everything about it was bigger. It felt bigger. But I didn’t have the greatest time recording because of stuff that I probably shouldn’t discuss.

How did you connect with Spartan Records?

I got an email from someone doing A&R for Spartan. They put me in touch with John from Spartan and we’ve been talking ever since. I couldn’t be more excited to be working with someone like John and am thrilled to be a part of the Spartan family. He’s a hardworking, creative, committed, honest guy and I am thrilled to be working with him. He’s worked at labels and with bands that have been extremely influential to me so I couldn’t be more pumped. As an artist it means the world to me that they want to help me share my story. Spartan has been great and I’m excited to grow together.

What are you biggest musical influences?

I wouldn’t be playing music if it weren’t for my older brother. When I was around 10 or 11 he borrowed our uncle’s guitar and started playing along to Weezer and Nirvana albums. I was blown away. I wanted to be a musician right then and there.

I grew up listening to Michael Jackson and Boyz II Men. Then growing up in the 90s I was hooked on bands like Nirvana, Smashing Pumpkins, and Radiohead. My favorite band for the longest time was Weezer. That led to bands like The Get Up Kids, Saves The Day, and Jimmy Eat World. Then I became enamored with Cursive, Manchester Orchestra, and Modest Mouse. Lately my favorites have been Jenny Lewis and Arcade Fire. Other artists I should mention are Ben Folds, The Beatles, The Beach Boys, Brand New, FUN, yada yada yada.

How have your physical surroundings (Brooklyn / Michigan) influenced your music or songwriting?

I’m not sure if living in Brooklyn has influenced my songwriting yet but growing up in Michigan definitely has. I cut my teeth on local heroes in the 90's like Small Brown Bike and Kid Brother Collective. I fell in love with bands like Braid. I think growing up and going to shows in the midwest definitely helped shape what bands I would be into and in turn had a massive influence on my songwriting.

Are there any specific songs, lyrics, or moments on the record that are especially meaningful or important to the band?

Every word and every song mean the absolute world to me but I think in the context of the album, one of the most meaningful moments to me comes at the end of the record where I repeat the words “I still sing.” The record starts with me moving to New York City after a hurricane hit. We lost our apartment, my band breaks up, my cousin is murdered, I lose faith, I meet someone, my best friend dies, I start losing my mind, and after all of that, I can still do the one thing that makes me happiest, sing. I still sing.

I can’t wait to get back on the road. In November I’m doing a short midwest run with Bret Newski. Next spring I am doing a full US tour with Carter Hulsey. Once the album is out, I plan on spending most of my time on the road, doing what I love the most, being on the road!

Any particularly relevant or irrelevant thoughts on the state of the nation / world right now?

Where is American Opera going from here?